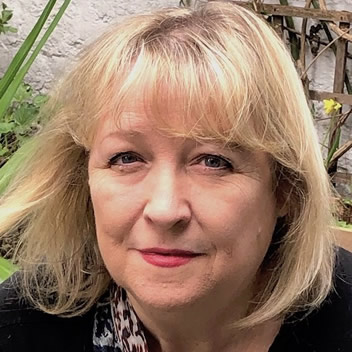 Shelley Page is Key Talent & Artist Liaison in Locksmith Animation. Shelley has been working in feature animation since 1986. Her career in animation began when she joined the London studio of legendary animation director Richard Williams from 1982 – which led to a position as head of backgrounds on the Walt Disney film ‘Who Framed Roger Rabbit?’ (1988).

Her 36+ feature film credits include: ‘Who Framed Roger Rabbit?’, ‘The Prince Of Egypt’, ‘Shrek’, ‘Madagascar’, ‘Kung Fu Panda’ and ‘How to Train Your Dragon’. In late 2019 Shelley joined Locksmith Animation in London to assist in building the team for the studio’s next feature animation project. Shelley also regularly teaches classes at many leading animation schools worldwide in her capacities as Visiting Professor and External Examiner. She has a particular interest in student animation and presents her popular ‘Eye Candy Show’ of the best animation shorts at many major international animation events.

Locksmith is a creative-led studio driven by a passion for original stories that combine comedy, heart and big ideas in proper movies for smart families.  Locksmith aims uniquely to connect with, inspire, entertain and explore the world of contemporary children in stories relevant to the animation audience of today. ​

The Company was founded in 2014 by Sarah Smith  and  Julie Lockhart, in partnership with Elisabeth Murdoch and VFX powerhouse Double Negative.

Locksmith is currently producing its inaugural feature, Ron’s Gone Wrong, to be distributed by Disney. It also has a multi-picture co-finance agreement with Warner Brothers.

From lockdown to a screen near you!

Shelley Page of Locksmith Animation, with input from her colleagues, will review the past year of working together remotely as Locksmith launches the studio’s first animated feature Ron’s Gone Wrong.