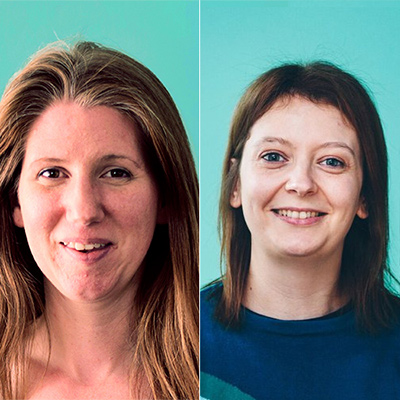 Helen heads up Blue-Zoo’s development department, that work on ideas
originated from within the studio as well as collaborating with Co-Producers on
development of original IP. Previously Helen has held positions directing and
producing many of Bluezoo’s popular animated children’s series including Miffy’s
Adventures Big and Small, Alphablocks and Olive the Ostrich. Since joining the
company in 2004, Helen has been selected as a Broadcast magazine ‘hotshot’
and has enjoyed several high-profile industry acknowledgments including a
BAFTA for NickJr’s bedtime stories.

Laura is the Development Manager for Blue Zoo. Working closely with IP owners to
advance their ideas, Co-Production partners to collaborate on a project, as well as
developing ideas from the ground up within the studio.
Previously a Production Manager, Laura has overseen Bafta nominated series Digby
Dragon for Nick Jnr, Miffy’s Adventures Big and Small for Tiny Pop
and Numberblocks and Tree Fu Tom for CBeebies.

One of the UK’s leading animation studios with a shelf full of BAFTAs for our trademark
CG character animation. We produce shorts, commercials, digital content and some of
the most well-loved kids shows on TV.

How to develop an animated TV series

From two experts in the development team at Blue Zoo Animation Studio, this presentation explains how to develop, produce and create new TV shows from scratch at the multi-BAFTA award-winning studio.

Come along to better understand the process and learn how your idea for a show can stand out from the
mile-high pile of ideas that are presented to commissions.